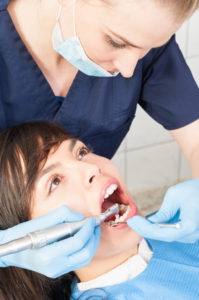 Dental amalgam is a primitive filling material made of between 43 and 54 percent mercury.  Amalgam fillings are commonly called as “silver fillings” – a marketing term that deceives many consumers into believing that amalgam is mainly silver, which is only a minor component of amalgam. Amalgam is not stable after it is implanted into human teeth – it constantly releases mercury vapor into your body.  And this mercury bioaccumulates.

Odorless, colorless, tasteless and toxic — mercury vapor casts a shadow in black light! This dramatic video of mercury vapor out- gassing from a “silver amalgam” dental filling has outraged the world since it was first demonstrated at an IAOMT meeting in 1995.